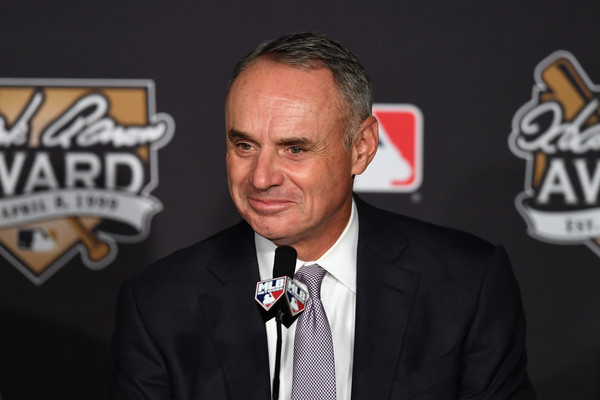 Manfred was given the post of MLB’s Chief Operating Officer in 2013. Then, during 2014, he was voted for the baseball’s new commissioner and luckily he qualified all the trials. On January 24, 2015, he holds the charge of a commissioner. Since then he is playing the most influential role in professional baseball. He is the current commissioner of baseball so he has owned a lucrative amount of income. Furthermore, Manfred has signed a 5 years contract extension for the post of baseball commissioner. According to the stats of his earnings:

As MLB Commissioner Salary of Rob Manfred in 2023:

This respectable man from the business sector and successful attorney general was born in Rome, New York. He was raised by American parents with two other siblings. Manfred’s father was a chemical engineer at Revere Copper and Brass Company while his mother was a teacher. He was a die heart fan of New York Yankees throughout his childhood.

He studied at Rome Free Academy and got his graduation diploma in 1976. From 1976-1978, he attended Le Moyne College and then moved to Cornell University later studied law from Harvard Law School in 1983.

Right after graduation, Manfred recruited by the federal district court ‘United States District for the District of Massachusetts’ for the judge Joseph L. Tauro as a clerk. On the other hand, Manfred was involved in ‘hands-on’ position, so within few years he became an associate of law firm Morgan, Lewis & Bockius, whose main target is to ensure labor and employment laws so, he began earning since that time.

His career in MLB:

While doing collective bargaining, Manfred was given an opportunity to work with the management of Major League Baseball. During the MLB strike tenure i.e. from1994-1995, he assisted the constituent team owners as outside counsel.

After that strike, Manfred was chosen as the Vice President of ‘Economics and League Affairs’. Manfred did a considerable role in negotiating the first drug-testing agreement among the Baseball players association and MLB (Major League Baseball). He was also the spokesperson of the league in CBA talks with baseball players.